”Step right up and see the amazingly weird eye conditions–hairy eyes, red eyes, cat eyes, and eyes that cry blood!” They may sound like carnival acts, but these truly bizarre eye conditions really do exist.

Body hair can certainly develop in odd places, but did you know it’s possible for it to sprout on the eyes? A 19-year-old Iranian man developed a rare cyst called a limbal dermoid on his right eyeball that grew hairs. The tumor was basically made up of skin cells that got misplaced in the eye while the man was still a baby in the womb.

You may have seen rabbits with red eyes, but have you ever seen a person with red eyes? Both are caused by albinism, a condition caused by insufficient production of melanin, the pigment that gives color to your hair, skin and eyes. The red color comes from the blood vessels behind the iris showing through.

If you see someone with two colored eyes, you might think that person lost their colored contact lens, but he or she may in fact have a disorder called heterochromia. Some people with this benign condition may have two different colors within the same eye or a circular ring of color outside the pupil.

4–Two Pupils in One Eye

Having two working pupils in the same eye–meaning they each have their own sphincter muscles and are capable of operating independently of each other–is extremely rare but can happen. It’s called polycoria and is one of the rarest conditions in the world. It is often confused with psudopolycoria–a condition in which it appears there are two or more pupils in one eye but the additional “pupils” are simply holes in the iris.

There’s an eye disorder known as aniridia which makes the eye appear to have “no iris.” In truth, there is a small ring of iris tissue but it is so small and the pupil is so large that it can look like the eyes are completely black. It is due to a chromosome mutation.

Another extremely rare chromosomal disease, cat eye syndrome is an absence of tissue in the eye which causes the pupil to narrow and push itself into the iris giving it a feline appearance. It is a chromosomal disorder that has a wide range of manifestations and can also affect other areas of the body such as the heart, kidneys, and skull.

More scientifically called haemolacria, crying blood is an extremely rare disorder that has been reported since the 16th century and considered a religious sign similar to stigmata. It is really caused by a number of factors including tumors, conjunctivitis, tears in the tear ducts, or hormonal changes. In fact, according to a 1991 study, 18 percent of fertile women have some blood in their tears versus only 7-8 percent of pregnant women, men, and post-menopausal women. As far as spontaneous cases with no known medical causes, it is so rare that a case is only seen only once every several years. 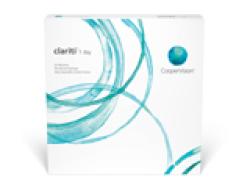 Take on the world with greater comfort. Wear the contact lens of confidence.